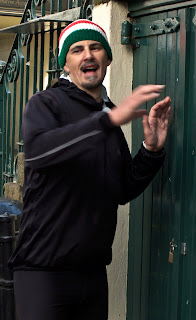 Navigator - Bob Whiteman. Pacers - Nigel, Ian Fellgazelle, Simon Lantern Rouge, Phil the Bat, Tom R and Ian Wheezing Donkey from Bowland for help on descending Robinson. Lead out man through market stalls - Ken Bother
Leg 5 starts by climbing Dalehead from Honister (the finish of the Borrowdale fell race route). You then take in the summits of Hindscarth and Robinson before returning to the Moot Hall in Keswick down the

I was delighted that we’d got Bob on board for leg 5. He claims his web-site was only started so he had an excuse not to watch Eastenders with his wife but his love of the fells and the BG shine through and we all know different


The Dalehead climb is the last big ascent on a clockwise round and I’d done it several times in the past and knew that although I wasn’t flying up I was at least up to 40minute pace. Bob was at the top to take a photograph as I ran the last few yards. 40peaks down, two to go


Hindscarth came and went at little more than a marching pace and we were soon back by the main ridge-line fence and climbing up to the path junction on the way to Robinson. To be honest I can’t remember the last peak but I do remember thinking it was a smart move to follow the fence-line rather than the trod that cuts off the corner, because conditions were not ideal


Yiannis phoned Ian Wheezing Donkey from near the summit of Gable and told him we were on our way and Ian kindly showed us his ‘Bowland by-pass’ avoiding the rock steps off Robinson after doing the same for Linda who’d blasted through Honister and was now ahead of our group. Wheezing Donkey, like Bob, is a real BG aficionado and has been helping out on attempts for over 25years. He once paid me the biggest back-handed complement of my life by saying, on top of Ingleborough at a night race, ‘hey Andy, didn’t you used to be a fat lad?’!


Once we were off Robinson all that was left to do was walk and trot back to Keswick. Bob had done his bit and drove back. Ian Charters and his wife Pauline were out taking photos. Ian like Bob has been inspirational and supportive in the past and it was great to see him and his wife coming out to see us home


I knew I had plenty of time and wasn’t in any rush to get back to the Moot Hall. My feet were a little sore but I felt good as we sauntered back through the lanes. Simon Lantern Rouge realised how much the day out meant to me and we had a good chat about the whole adventure


It’s not far from Portinscale to Keswick and we were joined by Ken Bother, complete with a bottle of Stef’s flat Coke. Ken did his damnedest to get me to run through Keswick but I said I’d only run when I was in sight of the Moot Hall


Running up to the Moot Hall was like coming home. There was a big crowd there including many friends and a good proportion of the folk who’d helped me through the day. Ian Charters took the photo at the head of this post and I don’t think I need to say any more about how much this all meant to me
Posted by Derby Tup at 09:44

Email ThisBlogThis!Share to TwitterShare to FacebookShare to Pinterest
Labels: bg 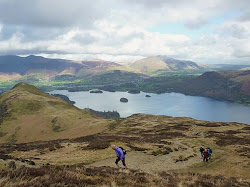 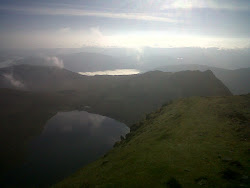 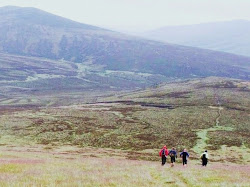